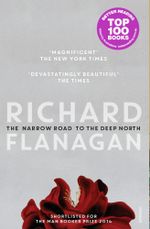 The Narrow Road to the Deep North

A novel of the cruelty of war, and tenuousness of life and the impossibility of love.

August, 1943. In the despair of a Japanese POW camp on the Thai-Burma death railway, Australian surgeon Dorrigo Evans is haunted by his love affair with his uncle’s young wife two years earlier. Struggling to save the men under his command from starvation, from cholera, from beatings, he receives a letter that will change his life forever.

This savagely beautiful novel is a story about the many forms of love and death, of war and truth, as one man comes of age, prospers, only to discover all that he has lost.

This is a stunning book. It is moving and horrific without being sentimental and lingered in my mind well after I finished the last page.

Told in three parts, primarily around the character of Dorrigo Evans, before, during and after his time as a P.O.W. on the Thai/Burma railway during World War II. Dorrigo is a surgeon who finds himself as the commanding officer in charge of hundreds of Australian P.O.W.s as they are starved and brutalised by the Japanese military.  Every character is fleshed out brilliantly. The secondary characters that do not survive linger throughout the book, and the survivors continue on with an understated stain that marks the rest of their days. Flanagan even manages to humanise the Japanese war criminals who view their actions as an honourable duty, even well into their old age.

It brilliantly subverts the idea of love, heroism and virtue. Dorrigo is not your typical hero protagonist. He is never comfortable with the admiration of his men, or the praise that he receives after the war. He is an adulterer who can never reconcile his feelings towards a lost, forbidden love and feels like a passenger within his loveless marriage.

I really can’t do this book justice in a short review. A must read.